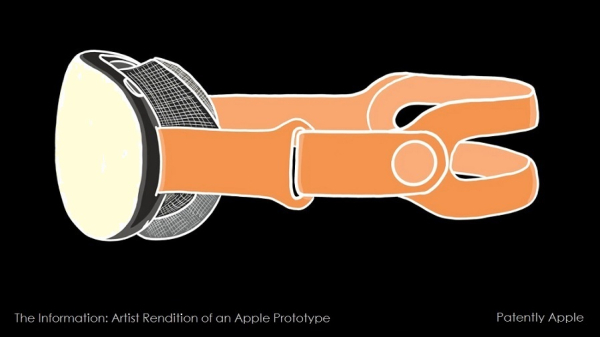 A snippet of the HTC video is shown below where you can see that the user will be able to move the dial above the lenses to adjust the vision of the left and right lenses according to the user’s visual needs without wearing glasses. of view. This gives us an idea of ​​how it will likely work for Apple’s HMD, which describes this capability later in one of their patents released Thursday.

In this particular report, we focus on the basics of Apple patent application 20210325678 entitled “Electronic devices with optical modules”.

Apple patent FIG. 1 below is a top view of a head mounted device with a corrective lens system. Apple also notes that it may be desirable to use a camera to capture images of the user’s irises (or other parts of the user’s eyes) for user authentication; FIG. 2 is a rear view of an example of a device mounted on the head

Apple’s patent FIG. 7 above is a rear view of an illustrative removable vision correction lens for an optical module.

The # 50L lens element can be formed from molded polymer, glass, or other transparent lens material. Lens # 50 can be removably attached to the support structure (Figure 1, # 32) in alignment with Lens # 30 (Figures 1 and 2). For example, a support structure for optical module # 40 may have magnetic structures (eg, magnets and / or iron bars or other members formed from a magnetic material). Corresponding magnetic structures can be included in lens 50.

Beyond the specifics of the patent being a corrective lens system, Apple also provides a general overview of Apple hardware relating to the interaction with CGR environments beyond their HMD.

Under “Hardware,” Apple notes, “There are many different types of electronic systems that allow a person to detect and / or interact with various CGR environments. Examples include head-mounted systems, projection-based systems, head-up displays (HUDs), vehicle windshields having built-in display capability, windows having built-in display capability, screens shaped like lenses designed to be placed on a person’s eyes (for example, similar to contact lenses), headsets / earphones, speaker sets, input systems (for example, portable or handheld controllers with or without haptic feedback), smartphones, tablets, and desktops / laptops.

If desired, the sensors can include optical sensors such as optical sensors that emit and detect light, ultrasonic sensors, optical touch sensors, optical proximity sensors and / or other touch sensors and / or or proximity sensors, monochromatic and color ambient light sensors, sensors, Ffingerprint sensors, iris scanning sensors, retinal scanning sensors and other biometric sensors, temperature sensors, measurement sensors three-dimensional gestures without contact (“aerial gestures”), pressure sensors, sensors for detecting position, orientation and / or movement (e.g. accelerometers, magnetic sensors such as compass sensors, gyroscopes and / or inertial measurement units which contain all or part of these sensors). accelerometers can be used to monitor when a finger comes in contact with an input surface and therefore can be used to collect finger pressure input etc.

Apple’s hardware and sensor overviews cover what could be included in the future Apple HMD across many generations of the device and which is not considered available on a single HMD from the start.

Patent application No. 20210325625 entitled “Lens mounting structures for head mounted devices”. Patent Summary: “A head mounted device can have optical modules that present images to the user’s left and right eyes. The optical modules can move relative to each other to accommodate different interpupillary distances of the user. Each optical module can have a lens barrel, a display coupled to the lens barrel that generates an image, and a lens mounted to the lens barrel through which the image is visible from an eyepiece housing. The lens may be a multi-element lens formed from molded lens elements such as a polymeric element molded lens. A lens element may be provided with protrusions which form lens tabs. The lens legs can have coplanar lens leg surfaces that mate with corresponding coplanar mounting surfaces in the lens barrel. Alignment marks may be formed on the protrusions and / or other parts of the lens. “

Patent application 20210325680 entitled “Electronic device mounted on the head”. Patent Abstract: “A head mounted device may have a head mounted housing.” The housing may include a frame with left and right openings that overlap with respective left and right optical modules that present image eyepieces. Each optical module can have a lens and screen that presents an image through the lens. The frame can have an inner frame and an outer frame. A middle portion of the frame may form a rigid nasal bridge structure. Components in the housing such as a display, fan housing, layer heat sink, optical module guide rods, and back cover can span the width of the housing and can be attached to edge portions of the housing. chassis, thus forming a box-like structure that provides rigidity and helps prevent deformation of the case.