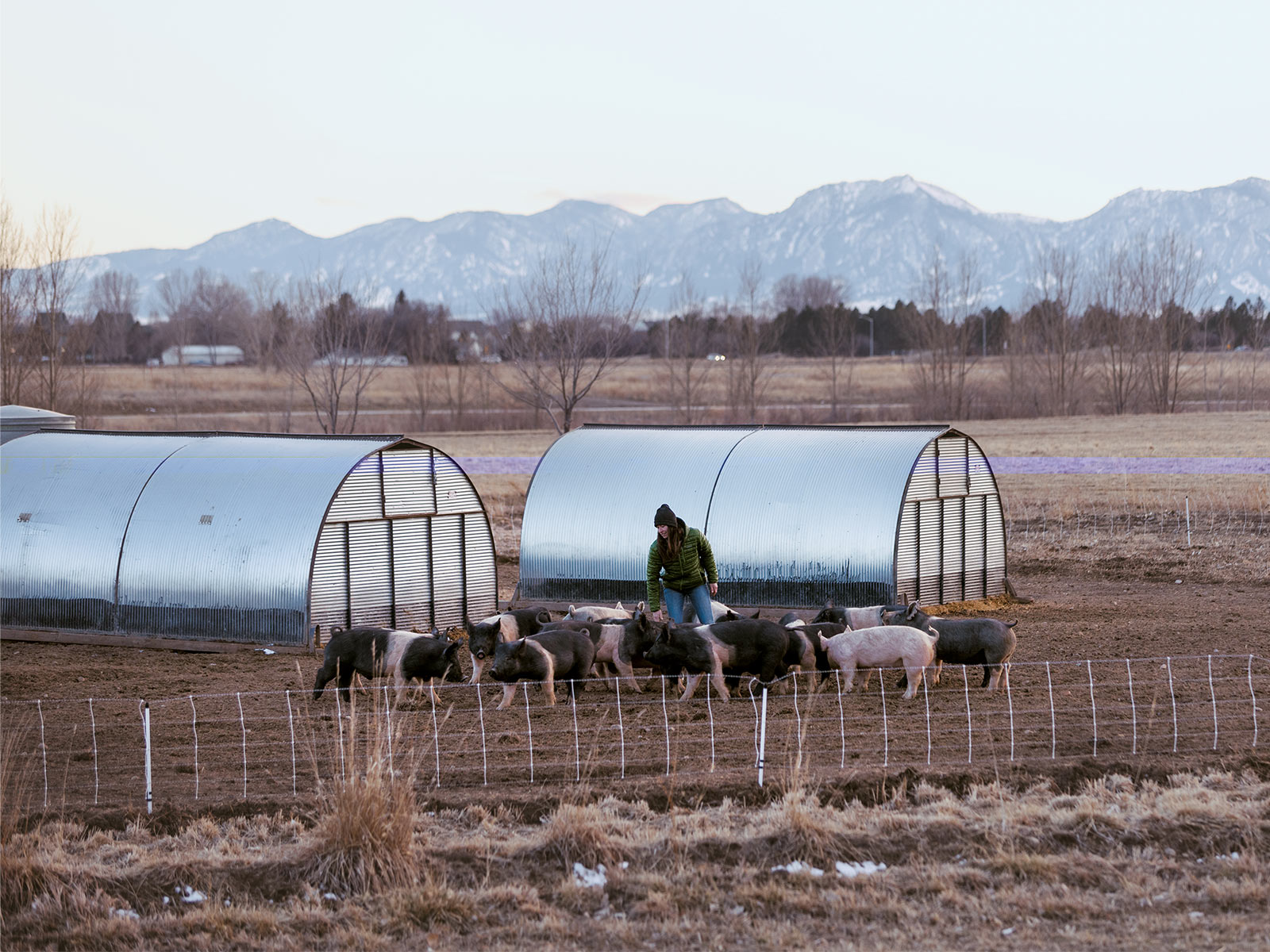 River Bear and SkyPilot Farms team up for local deli

On a blustery October day at SkyPilot Farm in Longmont, a herd of pigs feast on organic squash, apples and pumpkins. Their 15,000 square foot paddock, a movable fence that is moved every few days to new pastures, is lush with green alfalfa, which the animals nibble on as they meander. Craig Scariot and Chloe Johnson, the husband-and-wife farmers behind SkyPilot, nine, and their business partner, Justin Brunson, chat nearby about the outdoor setup that sustains these animals and the tasty provisions they hope the hogs will eventually become.

Brunson, the former chef-owner of the now-closed Old Major restaurant, founded River Bear American Meats three years ago to make artisanal deli meats, sausages and cured meats from responsibly raised livestock in Colorado and the Midwest. River Bear not only manufactures its own line of products, distributed in local markets such as Tony’s Meats locations in the Denver metro area, but it also processes meat products, for a fee, that farms such as the SkyPilot brand and sell themselves.

Scariot and Johnson approached Brunson in June 2020, seeking help processing their pork belly into bacon that they could sell at local farmers’ markets, as well as fresh cuts such as chops and loins. The partnership produced a peach-wood-smoked variety of the iconic breakfast meat that remains one of the farm’s best-selling items. It also led Brunson to learn that SkyPilot had freezers full of waste ham (the hind leg portions that make up about 30% of the meat in a carcass) and fat (the long strips of fat between the shoulders and hips ) – bottom- consumer-demand items that, in the right hands, can become highly sought-after charcuterie board stars. “Nobody cooks a fucking ham at home anymore,” says Brunson. “So we’ll take that and the [fatback] and make salami and sausages. This is one of the things I love about charcuterie; you get everything that’s hard to move and turn it into this delicious, awesome product.

This discovery inspired the trio to team up to produce an Italian-style salami made from fresh fennel seeds, fennel pollen, and white wine and ground to a firm, coarse texture before curing. But they had to wait another four months—a time filled with slaughter, science, and “good old-fashioned meatmaking,” as Brunson puts it—before the inaugural batch was ready to sample.

Some 200 pigs, 800 sheep and 500 chickens inhabit SkyPilot’s 800 acres, 43 of which are owned by Scariot and Johnson. (They rent out the rest to other landowners.) Animals are moved from field to field, which increases plant growth, water retention, and biodiversity by allowing pastures to replenish nutrients and vegetation. This gives flora the power to remove carbon from the air and store it in the soil, helping to reverse carbon emissions. It’s part of a practice called regenerative agriculture that benefits the local ecosystem but can be hard on a farm’s bottom line. SkyPilot also gives its animals more room to move around the paddock than the industry standard, and paddock rotation requires more pasture than typical herding. Each pig, for example, enjoys 300 to 500 square feet of land, compared to less than 100 square feet on a factory farm. Additionally, SkyPilot pigs live up to 12 months before slaughter, twice as long as conventionally raised cattle, consuming twice as much feed, water and care.

Scariot and Johnson say that in addition to helping the planet, their animals’ lifestyle and luxury organic diets give their chops and shoulders improved fat, marbling and flavor. But increased upfront costs meant they were happy to take advantage of Brunson’s suggestion to profit nose to tail. “We want to raise the best treated, happiest and healthiest animals, but in the end it doesn’t matter if we can’t sell [them]said Scariot. “That’s where Justin comes in. He creates a lot of stuff that allows us to sell the whole animal and make it all work.”

However, making charcuterie is a long and laborious process. After SkyPilot sends its happy pumpkin-fed pigs to the slaughterhouse (what Scariot and Johnson call their “bad day”), they save the cuts suitable for the farmers’ market to sell directly to consumers, then ship hundreds of pounds of ham and back to River Bear’s USDA certified facility at RiNo. There, Brunson’s team cuts the meat by hand, grinds it twice, and combines it with a starter culture (fermentation-promoting microorganisms) and fragrant seasonings.

The resulting mixture is packed in natural beef casings, which are pierced with holes to release any pockets of oxygen. Next, Brunson inoculates the salami with mold strains, essential for imparting a floral flavor and preventing the salami from drying out too quickly. The product is moved to a humid room at 73 degrees to ferment, where for a few days the lactobacilli bacteria thrive, making the salami too acidic for harmful microorganisms to survive. Finally, the salamis are transferred to River Bear’s drying room to hang among racks of other fermented offerings, such as ‘nduja and bresaola, for seven weeks.

River Bear processes 45,000 pounds of pork and beef from large-scale partners into bacon, sausages and steaks each week, but deli meats remain Brunson’s meat-making passion. This year, it plans to expand the capacity of its dry aging program from 20,000 pounds to more than 60,000 pounds of salami, pancetta and other savory varieties. Although making small batches (say, 500 pounds) for farmers like SkyPilot is less profitable than processing larger batches (5,000 pounds), due to labor costs, Brunson takes a modest financial blow to help the little guys maintain their livelihoods. “We care about the animals as much as they do,” he says. “I would feel awful if we messed up a batch of something – it would just tear my soul apart. I know how much work there is in all of this.

Fortunately, the trio’s first salami experiment, which came out of the dry-aging room in January, was a success. Slices (best served with a mineral, acidic white wine, says Brunson) burst with sweet, aromatic fennel and melt-in-your-mouth pockets of fat. Customers loved it, buying the sausages through SkyPilot’s website and at Highland Leevers Locavore Market for $18 a stick – a price that earns SkyPilot twice as much profit as a cut of ham, while still taking advantage of the chunks pork that just weren’t used. .

SkyPilot’s Fennel Salami, complete with bacon, pork chops and sausages, is available at skypilotfarm.com, or look for Johnson and Scariot stands at Boulder County Farmers Markets in Boulder and Longmont.

Reframing the store as a health and wellness experience