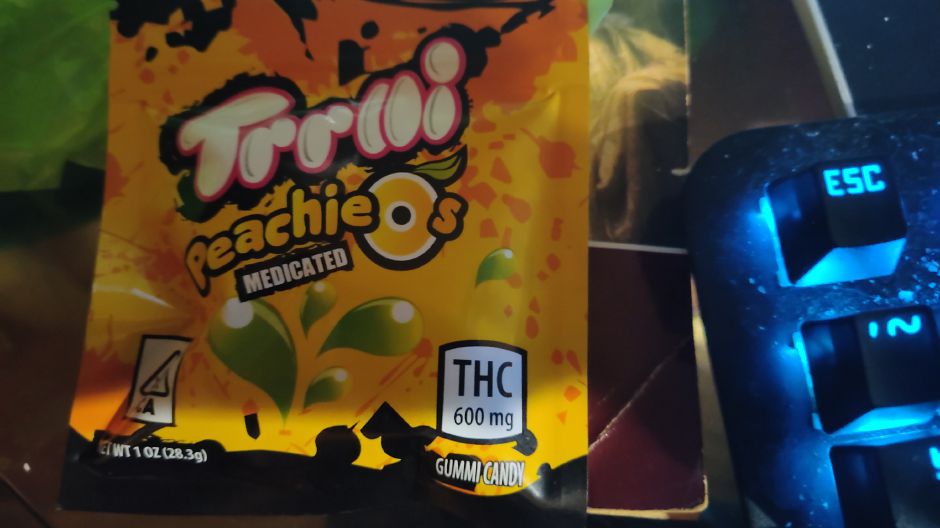 Attorney General William Tong said this week that sales of over-the-counter THC products are unsafe, unregulated and must be reported to authorities.

“This product likely violates several of our packaging and advertising provisions and may be in violation of Connecticut’s unfair trade practices law,” Tong said in a statement. “Furthermore, selling cannabis without a license is a criminal offence. Anyone seeing these products for sale should contact both the Attorney General’s office and local law enforcement.

The state has not yet licensed any retailers for the sale of adult recreational cannabis, but expects to do so by the end of the year.

The Record-Journal found two CBD, vape and tobacco shops in Meriden and one in Wallingford retailing delta-8 and delta-9 THC in gummies and rolled joints. THC is the psychoactive ingredient found in cannabis.

Product names included Caviar Kush and Peachie O’s with brightly colored candy-like packaging. Other similar products were in plain packaging. None contained lot numbers or a list of ingredients. Tong released his statement after seeing a photo of a sample purchased by the Record-Journal in downtown Meriden this week.

Local store owners, however, said they did not believe it was illegal to retail the products.

Two owners defended their sales by citing the 2018 Farm Bill that legalized the sale of hemp products as long as they contained less than 0.3% THC on a dry weight basis. One shop owner said the average 10-15% THC in products is significantly lower than the dispensary average of 25-30%.

Most products are a combination of delta-8 and delta-9 THC which is derived from the hemp plant in a THC extraction process. The combined weight of the products can result in a THC volume greater than 0.3%.

Just like with conventional THC, these products vary in strength. Some touted THC content as high as 600 milligrams in a five-pack of gummies that sold over the counter in Meriden for $20.

The state Department of Consumer Protection issues vaping accessory licenses to vape and tobacco stores. The department is also working on a lottery system to grant dispensary and cultivation licenses to operators of the adult-use marijuana program.

When shown a photo of a packet of gum purchased in downtown Meriden this week, DCP officials said it does not regulate companies that do not obtain licenses through the department. However, a department spokeswoman shared Tong’s concerns about the packaging.

“There are strict packaging requirements for adult and medical marijuana products sold by licensees in Connecticut,” DCP spokeswoman Kaitlyn Krasselt said. “The packaging in the photo does not appear to meet these requirements.”

Unlike products sold at dispensaries, delta-8 and -9 products often do not contain lot numbers or ingredient lists designed to tell consumers what they are ingesting. It is also unclear whether age restrictions are enforced.

Delta-8 THC is regulated in Connecticut, so you can only buy it from licensed cannabis retailers. The state passed Bill 1201 last year, which legalizes cannabis for adult use and adds delta-8 to the definition of THC and marijuana.

Last year, the city of Wallingford banned all local production and sale of cannabis. State Rep. Craig Fishbein, R-Wallingford, who is also an elected alderman in Wallingford, was unaware of illicit retail sales of THC products in Wallingford and Meriden, but said he warned against this possibility during the debate on recreational marijuana.

“During debate on the bill, I mentioned that the proposed wording, if passed, could allow situations like this to occur — to no avail,” Fishbein said in a statement. “Reports from the Connecticut Department of Health have shown a significant increase in cases where children have ingested these products, to their detriment. It is shameful that during the public hearing into the so-called “legalization”, no one from the Ministry of Public Health or the Ministry of Mental Health and Addiction Services came forward to testify about the pros or cons of our state authorizing the sale of these products. ”

Fishbein, a family law attorney, said he has seen cases over the past year where parents and children have been significantly negatively affected by the use of cannabis products, he said. declared.

Democrat Rebecca Hyland of Wallingford, a former public defender who is challenging Fishbein in the 90th House District race, could not immediately be reached for comment.

Tong issued a warning to the public in November about the dangers of cannabis edibles and hemp derivatives in packaging designed to look like well-known snacks and candies.

“These products are unregulated, illegal and can be extremely dangerous,” Tong said in a press release. Examples confiscated by law enforcement looked like Sour Patch candies and Oreo cookies.

“These products may contain high concentrations of (THC) … and if consumed by children, may lead to accidental overdose,” according to the statement prepared by Tong.

In the first nine months of 2020, 80% of calls related to marijuana edibles to the poison control center were for pediatric exposure. In the first half of 2021 alone, the American Association of Poison Control Centers reported that poison control hotlines received approximately 2,622 calls for services related to the ingestion of cannabis products by young children.

The Connecticut Poison Control Center received 88 calls in 2020 about children’s exposure to edible marijuana, and 58 calls in the first seven months of 2021.

“These look-alike cannabis products are unregulated, dangerous and illegal,” Tong said. “While Connecticut recently legalized cannabis for adult use, many of these products fall well outside the range of what will ever be safe or permitted for sale.”

“Not only are these products being sold illegally, but the misleading packaging that does not clearly tell the consumer what they are ingesting is extremely dangerous, especially when there may be children in the home,” she said. declared.

For this reason, the state has required all packaging to be black and white and child-resistant, so there will be no confusion with a non-cannabis product.

Additionally, when retail establishments are allowed to sell cannabis, edibles will be subject to strict security checks. For example, a single adult serving of an edible cannabis product under the law can only contain five milligrams of THC, and a multi-serving package of an edible cannabis product must contain no more than 100 milligrams of THC. Total THC, according to the Department of Consumer Protection.

If a child ingested a bag full of gummies containing 600 milligrams of THC, they would be consuming 120 times the maximum legal adult serving, the warning states.

A spokesperson for the state Department of Public Health said Friday that the department could not share additional information about sales at vape and tobacco stores because it “plays no role in granting licenses for these products”.