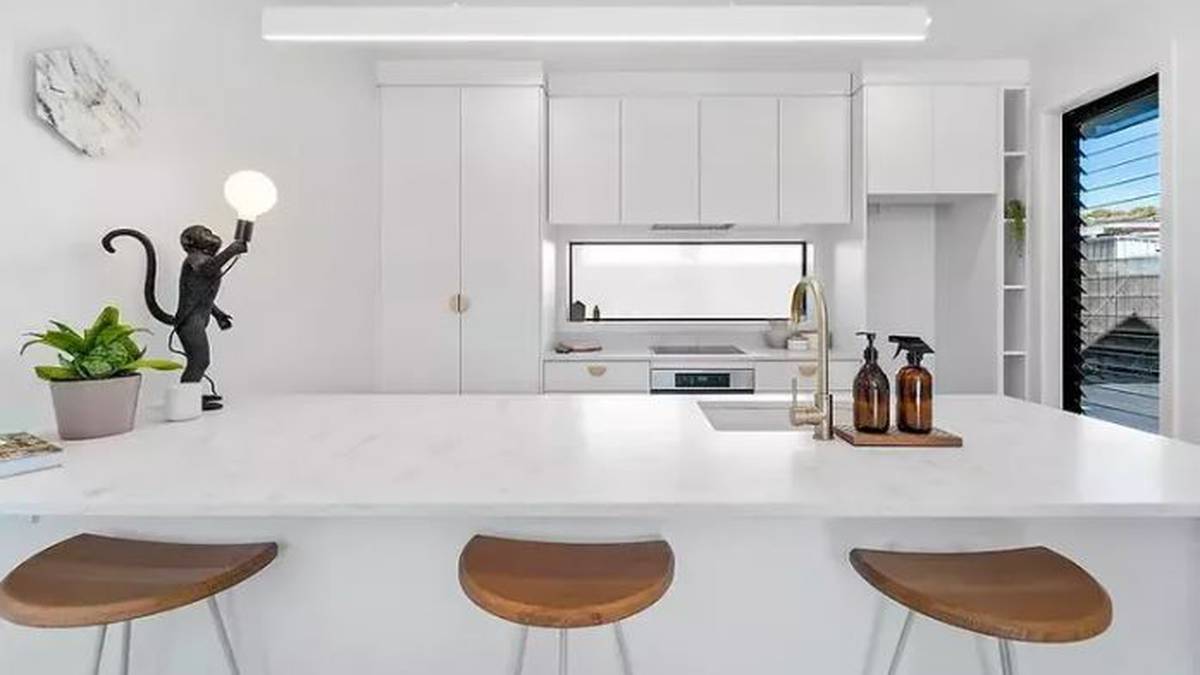 The spin-off: Inside Auckland’s building boom: ‘The next development could be the end of you’

A switchable glass window allows it to frost at the press of a button. Photo / Provided

Previously posted in The Spinoff

Real estate prices are falling and the cost of building materials is rising. A developer admits that it is risky to build townhouses.

“It is an American oak stair nosing,” says Antony Fotheringhame. The tanned builder stands on a staircase in a new four-bedroom house on the Te Atatu Peninsula, brushing dust off the steps with his palm.

“Normally you carpet the stairs,” he says. Instead, he made the wooden staircase to match the kitchen floors, then installed a custom handrail that lights up at night.

It took a lot longer and cost more, but Fotheringhame thinks it’s worth it. “It’s the little things,” he says. “We try to do things differently.”

In this crisp suburban family home and the five others built on this 800 square meter site, no corner has been cut.

The kitchen is lit by a switchable glass window that allows residents to protect the living areas from strangers with the push of a button. “It cost us way too much money,” says Ariki Fotheringhame, Antony’s wife and business partner in their A&A Fotheringhame Builders business. “We’re a little over it.”

Other developers would block up to 11 properties on similarly sized sites, often with no room for cars or bins. But the Fotheringhams refuse to cut corners to make more money.

Their motto is: “If we can’t live there, then… we don’t want to build it. And we don’t expect anyone else to live there.

This property on the Te Atatu Peninsula recently sold for over $1 million. As they show me around, Antony and Ariki’s nerves are evident. The developers invited The Spinoff to see what they were up to after reading this story which covered the incredible amount of development going on in the western suburbs of Auckland.

Afraid of sticking their necks out and citing the refusal of residents, all the promoters approached had refused to declare themselves. After several tentative email exchanges, the Fotheringhams decided to have their say.

Why now? “We’re not like other developers,” says Ariki. With their two children, the young family lives in the suburbs, they both work there and have family there.

If they are making a shonky product, word will soon spread. After two successful developments in townhouse construction on Neil Ave, they consider themselves among the good guys. They recycle old homes when possible, notify neighbors of upcoming construction noises, and guarantee their work for 10 years.

This is not the case for all developers. Thanks to changes to the unit plan, several development companies have reclaimed dozens of sections across the peninsula, moving or demolishing the original homes, then cramming in as many two-bedroom townhouses as they can fit. Residents fight for street parks and find inventive ways to get rid of trash.

This has turned Te Atatū into a battleground between those who want the suburbs to stay the same and those who see the benefits of a growing population. This argument plays out in daily posts on the community’s Facebook page and in conversations between neighbors, all punctuated by the familiar background noise of construction.

Tired of arguments or worried about building three-storey townhouses next door, some have fled the peninsula for quieter parts of the country. The day I visited Ariki and Antony, I took my daughter to school and met a friend. One of his first questions was whether we intended to move. As we spoke, hammers and nail guns could be heard from a nearby construction site.

Antony and Ariki run one of the smaller development companies working in Te Atatū. They have completed two sites and have three more on their books. They already have direct experience of this overflowing tension. Recently, they were accosted by a local who accused them of “ruining the community”.

“She’s lived here all her life,” says Ariki, who can relate to her point. “She’s crazy for that to change.”

The Fotheringhames began to develop two years ago, on a site on Neil Ave opposite the one we are in. Fed up with working for others, Antony decided he wanted to build for himself. They moved the original house from the site next door, built a house in front, then lived there while developing three more townhouses behind them.

One day, during construction, a competing promoter visits them. He asked Antoine why he was only putting four houses on the site, then told him to fire his financial adviser. He thought he was crazy for not maximizing profits by hoarding as much as possible. Visit any street on the peninsula and you’ll see examples of developers doing just that.

“We told him that we care about the community,” says Ariki. “If we weren’t doing it in our own community, we’re not going to do it in somebody else’s community.”

Ariki recently quit her job as a schoolteacher to work full-time in the company. With the housing market down and construction costs rising, the two admit it’s not a good time to be a developer. Some products must be ordered 18 months in advance, says Ariki. The banks will no longer lend them money and they have been forced to turn to second-tier lenders. It all sounds risky. He is.

“It’s a huge risk,” says Antony. “If it wasn’t so risky, everyone would be doing it…the next development could be your end.” But the pair refuses to cut quality to save on costs, even during a market meltdown. “We think quality speaks,” says Antony. “Even in a quiet time like this, we like to think that a good product will sell and a crap product won’t.

People seem to notice. I spoke to a potential buyer who recently viewed his Neil Ave site and was impressed with the attention to detail. “The work they produce is legit and they involve you throughout the process…choosing key design elements like faucets and tiles.”

Yet the question remains: why was Te Atatū targeted? The Fotheringhams say it’s not just this suburb. On recent drives to the airport and north to Red Beach, they were shocked at the number of new developments they saw.

Despite the ups and downs of the market, development on the outskirts is here to stay. “You drive anywhere,” says Antony, “and it’s everywhere.”

When to use oil instead of butter for cooking